This is so much fun, having you here! Thanks for stopping by… think of it like hugs from a distance.

My name is Sue Wilder.

Some days, I’m so deep into the story, I forget to cook dinner. Fortunately, my husband knows how to make more than a standard hamburger. But I love it when the ideas flow.

There are other days, though, when the delete key loves me. And days when I’ve had to replace keyboards because I wore down the “T” and the “S”. Those keys are far enough apart that it doesn’t matter, if they go missing. Other than it’s annoying to realize how many words use those letters.

But when the “T” and the “R” both go missing, we go directly to Best Buy. I need to tell those keys apart. I mean, “rhe” doesn’t have the same oomph as “the,” and I do need that word.

Did I tell you? I write romances. They’re hard to categorize, a mix of romance, thrills, paranormal activities and a lot of past lives. I could call the Calata Books romance paranormals, which sounds too awkward to use, but you get my meaning. More romance. Fewer para’s.

My other romances are contemporary, but I try to hide a paranormal twist in there somewhere–can’t help myself.

And I may shoot off in a new direction and write mafia romance–keeps life interesting.

Thanks so much for visiting. Please wander around the site!

I like to use historical details as a background for the stories I write. In The Smoke in Shadows, a Roman ambush is a major plot element. It’s based on an actual event that took place several centuries before Darius’ ambush, and in Germany, not in Northern Italy. I found the account in an article …

END_OF_DOCUMENT_TOKEN_TO_BE_REPLACED

Excerpt from The Smoke in Shadows:

Release Date: April 16, 2020 Pre-order now for this sizzling love story between Darius (Three’s favorite Roman general) and Nicola Poppa–the girl who wrote The Judas Horse, a best-selling book about an immortal man who was also a legend… or was he? Nic made one impulsive mistake. She wrote a book about a little-known Roman …

END_OF_DOCUMENT_TOKEN_TO_BE_REPLACED

What readers are saying:

“I love this author.” … “I am totally hooked” … “I loved your books I could not put them down.” … “Loved the first 2 books in this series!” … “I love this kind of fantasy story. Written well so you think maybe this could be real, but you know it isn’t. Had me thinking about who is really in control of my life. I recommend this book to fantasy buffs.” … “Now I’m hooked on the characters. Enforcers Legacy will be a really great series if the books keep going in the same direction as this first.” … “I really enjoyed this one. Sue Wilder is a great writer and I am looking forward to what is to come from her.” … “I LOVED it! Terrific book…can’t wait for the next book.”

Thousands of years ago an ancient race discovered this planet and settled in, dividing the territories and manipulating the human populations. They were extremely long-lived. In fact, they believed they were immortal. Then an unexpected murder occurred, and in a rush for self-protection, something new was created: men who looked human but weren’t. They were shapeshifters, lethal and effective, with human emotions and immortal capabilities.

They were called warriors, and the most powerful were the enforcers.

The human populations thought them creatures of myth, and like most myths there was a tragic element. Some warriors fell in love with human girls and they became more human. They questioned, thought about right and wrong, began to challenge the six ruling
immortals known as the Calata.

Conflict erupted, as conflict usually does, and as part of an Agreement to prevent war, these immortal warriors asked for their human lovers to be made immortal. Since the magic was beyond the abilities of the alchemists, reincarnation was offered as a solution. The natural process could be manipulated. Ancient magic would allow the lovers to reunite in each recurring human lifetime-now known in human populations as “past lives.”

It hasn’t worked out as expected.

ORDER ON AMAZON THE DARKNESS IN DREAMS 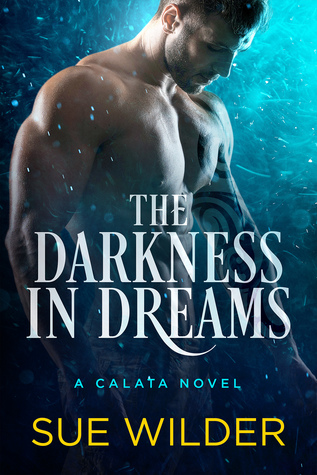 “What kind of man loves…for centuries?”

“You’ve spent lifetimes with him… aren’t you even curious?”

Christan and Lexi’s trilogy, book one

ORDER ON AMAZON THE DARKNESS IN DREAMS

ORDER ON AMAZON THE FIRE IN VENGEANCE

What kind of man … loves with no rules?

ORDER ON AMAZON THE FIRE IN VENGEANCE

ORDER ON AMAZON THE DANGER IN JUSTICE

What kind of man loves… beyond vengeance?

ORDER ON AMAZON THE DANGER IN JUSTICE

ORDER HERE ON AMAZON  THE TEARS IN MIDNIGHT

He’s chased after her for centuries.

ORDER HERE ON AMAZON  THE TEARS IN MIDNIGHT

ORDER ON AMAZON  THE MEMORIES IN MOONLIGHT

He said he would leave, but not until he was ready…

ORDER ON AMAZON  THE MEMORIES IN MOONLIGHT

ORDER ON AMAZON THE SMOKE IN SHADOWS

She could be everything he needs… or she could destroy him

BUY THE SMOKE IN SHADOWS ON AMAZON

Sue Wilder writes contemporary and paranormal romances “worth the read.” ~Kirkus Reviews for “The Tears in Midnight.” She lives in the Pacific Northwest with her husband and a yellow lab puppy who chews on her chair. She has a bachelor’s degree in Fine Art, and is known to enjoy good wine while listening to old sappy jazz, and watching sunsets when the weather is warm.

THE TEARS IN MIDNIGHT

“…a solid romance. Indeed, the second-chance-at-love plotline alone makes the book worth a read, mainly for the author’s clear, emotional prose (“Arsen was tangling his fingers in her hair and she was breathing in, holding the warmth close, locking the scent of his skin deep in her lungs”).

A sturdy entry in a fantasy series about unbreakable bonds. ~ Kirkus Reviews

I love this kind of fantasy story. Written well so you think maybe this could be real, but you know it isn’t. Had me thinking about who is really in control of my life. I recommend this book to fantasy buffs.

This novel was phenomenal. I won a copy in a giveaway, and I couldn’t be happier. With realistic fun characters, a unique and interesting plot full of suspense, action, surprises, twists, and turns, and a vivid, fluid writing style, I felt like I was right there with the characters experiencing everything right along with them. This novel has all the makings of a perfect paranormal romance novel and is a must read!!!

I liked this story from the first page. By the second chapter I was hoping there was a book 2 because one wouldn’t be enough. I read for hours deep into the night two nights in a row. Such a deep love story that I felt it in my gut, and the love scenes were palpable. Moving on to book 2 now.

This book is very well done. The characters in writing were nearly perfect. The excitement and suspense we’re wonderful. I can’t think of anything bad to say about this book, except that I finished it!

Thoroughly enjoyed this book although I’ll admit at times it was difficult to follow. I will continue the story though.

THE DARKNESS IN DREAMS

Wilder posits an interesting correlation between the immortal enforcers and their human mates who are reborn with their memories buried deeply within their consciousness… the story is fast-paced, and her shifter-enforcers are grand fun to watch. THE DARKNESS IN DREAMS is highly recommended. FIVE STARS. ~ Readers’ Favorite

THE FIRE IN VENGEANCE

…not only a paranormal romance, but a gripping tale of past lives, looming threats, sinister happenings, manipulation, danger, regret, and increasing stakes. it is hard not to be drawn to the characters, and harder still to put the book down.  FIVE STARS. ~ Readers’ Favorite

THE DANGER IN JUSTICE

Honestly, I loved everything about this book… the plot is complex and weaves throughout human history. The locations and setting can be exotic and are described very well. The writing is great and moves the plot along at a crisp pace. But it is the characters that really make this story great in my opinion. FIVE STARS ~ Readers’ Favorite